Firstly, Dr. Zhou Xiaonong introduced the background and main progress of Demonstration Project, explained the achievements of malaria Reactive Community-based Testing and Treatment Response (1-7mRCT) during the implementation of the pilot project, and expressed sincere gratitude for timely support of the Demonstration Project by Department of International Cooperation of the NHC and BMGF. Prof. Honorati Masanja of IHI, said that China has extensive experiences on malaria control and elimination, and expressed appreciation to National Health Commission, China-UK Global Health Support Project and BMGF for their support and close cooperation and technical support of experts in NIPD, he hopes that Demonstration Project will have more outputs and express the idea that we can go further only if we work together. Dr Zhang Zhaoyang spoke highly of the achievements of the China-UK Global Health Support Project and stated that they will continue to support this Demonstration Project.

Dr. Li Yinuo from BMGF Beijing Representative Office confirmed China’s remarkable achievements on malaria elimination-no local malaria cases since 2017, and the goal of eliminating malaria in 2020 will be achieved. At present, more than 90% of malaria disease burden is in Africa. The BMGF supports the China-Tanzania Demonstration Project on Malaria Control and supports the Chinese government to transfer Chinas anti-malaria experiences to African countries. This is also in line with BMGFs China strategy: from China to China, from China to Africa, promoting health innovation and partnership. Mr. Gates is very supportive of the global fight against malaria and polio, and is committed to promoting and accelerating global malaria. Elimination. Thanks to UK Department for International Development, NHC of China and NIPD for their support and efforts in the early stages of project; BMGF hopes to support the promotion of Chinese experiences in a wider range of areas by innovation and partnership. They will strengthen investment in funds and partners, promote Chinas experiences and technology practice in Africa, and express Chinese stories together.

Dr. Nie Jiangang, pointed out that China-UK-Tanzania Pilot Project on Malaria Control is a highlight project of the China-UK Global Health Support Project. It has achieved good results through the field intervention. All of the parties have a common goal and vision, and BMGF has great advantages in terms of capital and ideas. Through BMGF to distill and refine Chinese experiences, and the pre-certification integration of relevant projects by the WHO, the innovative methods and techniques to solve practical problems, we explore from bilateral to multilateral China-Africa health cooperation mechanism to promote local health system. We are committed to combining concepts of African cooperation, African participation, and African development, disseminating Chinese experiences, and telling the Chinese story for promoting internationalization; applying their respective advantages in planning, designing and implementing projects to serve the “Belt and Road” initiative of the country and promoting the building of a community with a shared future for mankind, and ultimately making a practical contribution to the realization of the UN sustainable development goals.

Finally, under joint witness of all participants, Prof. Zhou Xiaonong of NIPD and Prof. Honorati Masanja of IHI, signed agreement on Demonstration Project. 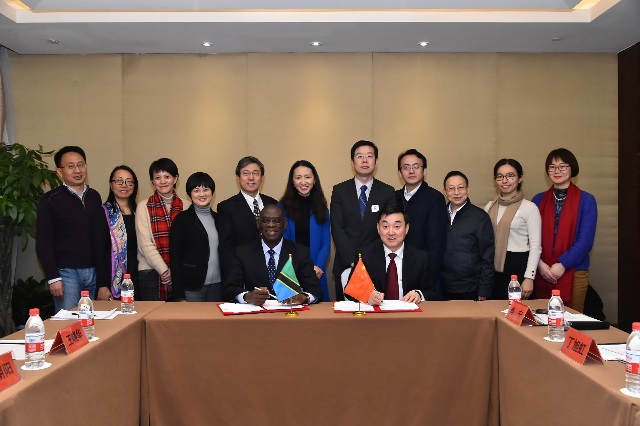 Figure, Joint Witness to Sign the MOU of China-Tanzania