In order to implement the “Belt and Road” initiative, promote the construction of “Healthy Silk Road” and deepen China-Africa health cooperation, August 17-18, 2018, the High-Level Meeting on China-Africa Health Cooperation was held in Beijing as scheduled. This conference is one of the supporting activities of the Beijing Summit of the Forum on China-Africa Cooperation. More than 300 people from 36 African countries and relevant departments of China, experts and scholars, representatives of international organizations and industry leaders attended the conference. Madame Cui Li, deputy director of the National Health Commission of China, attended the opening ceremony and delivered speeches, including representatives from the health departments of Africa, Nigeria, Sao Tome and Principe, Tanzania, Zambia, the World Health Organization and other international organizations. The heads of Chinese Ministry of Foreign Affairs, China International Development Cooperation Agency and the State Administration of Traditional Chinese Medicine attended the opening ceremony and delivered speeches.

As one of the important topics, thematic Session 7: China-Africa Cooperation on Malaria and Schistosomiasis Elimination was held on the morning of August 18, and the session was co-organized by the National Institute of Parasitic Diseases, Chinese Center for Disease Control and Prevention. Dr Ren Minghui, Assistant Director-General for Communicable Diseases, WHO and Dr Feng Yong, deputy director-general of the Department of International Cooperation, National Health Commission of China, attended the meeting. Ministers and officials of health from a number of African countries including Zambia, Central Africa, Nigeria, Malawi, Gambia, South Sudanand Ethiopia, as well as seniors from international organizations such as the World Health Organization, the Bill and Melinda Gates Foundation Officials attend. Dr Zhou Xiaonong, director of the National Institute of Parasitic Diseases, Chinese Center for Disease Control and Prevention, and the Jackson Sillah Malaria Project Coordinator of the WHO Africa Region co-chaired the meeting. Senior officials from the Ministry of Health of Zambia, the Central African Ministry of Health and Population, and the National Health and Health Committee of China delivered speeches respectively on the malaria prevention and control processes and challenges in various countries. Representatives from the World Health Organization, the Roll Back Malaria Partnership, and the Global Fund addressed the global situation of malaria progress, challenges and future plans. Delegates from Ifakara Health Institute, Tanzania, Jiangsu Institute of Parasitic Diseases, China and Guangzhou University of Chinese Medicine, China shared the experience of the pilot project on malaria and schistosomiasis control in Tanzania, Pemba and Comoro supported by China.

Dr Zhou Xiaonong presided over the closing ceremony of the sub-forum. He said that China would continue to promote the cooperation on malaria in China and Africa with starting the malaria control project in Tanzania. He called all for international cooperation on control of schistosomiasis in China and Africa to work hard to promote the realization of universal health coverage. Finally, the Chinese Center for Disease Control and Prevention, the National Institute of Parasitic Diseases, and representatives from malaria institutions in Tanzania, Cameroon, Zambia and Sierra Leone reached an agreement of China-Africa malaria cooperation by signing a memorandum of understanding on the establishment of a network of malaria elimination between each other to direct future cooperation. 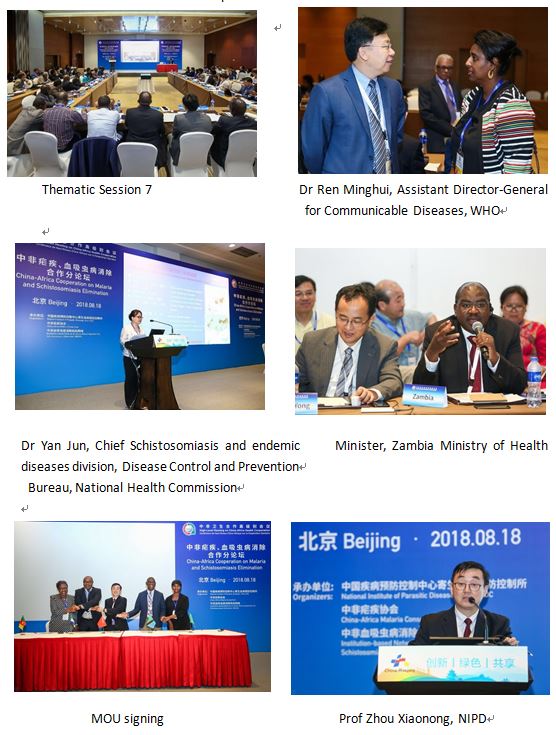